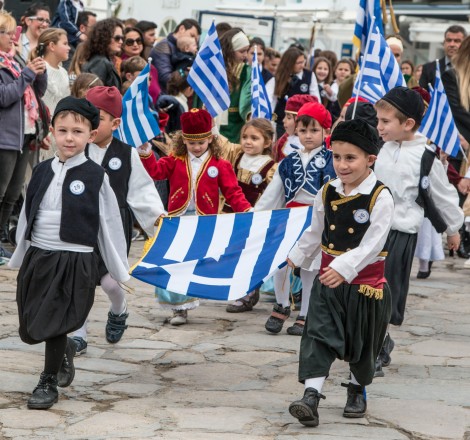 March 25 is both a national, (Independence) and religious, (Annunciation) holiday.  Greeks have celebrated for 197 years their independence from the Ottoman Empire.

This day is also one of the holiest for Greek Orthodoxy.  It is the day that the Archangel Gabriel announced to Mary that she would bear a child.   It is this day in 1821 that the revolution began in defiance of the Turks.  For centuries the Ottoman Empire tried unsuccessfully to assimilate and convert the Greeks.  The Greek uprising overcame 400 years of occupation and oppression.  Many thousands had been killed and tortured for attending church or teaching their children about their Greek language, history and culture.

In remembrance of this historic day in Greece, each school now parades with the national flag while the armed forces parade in Athens.  It is also the name day for Vangelis or Evangelos and Vangelio or Evangelia or Eva.

About the Greek flag: “Freedom or Death” ( Eleftheria i Thanatos) was the motto during the Greek Revolution against the Ottoman Empire. It is believed that the nine lines of the flag represent each letter of the  Greek word for freedom.  “Eleftheria”

The line pattern was chosen because of the similarity with the wavy sea that surround the shores of Greece. The blue and white colors makes the Hellenic Flag on a windy day look like the Aegean Sea.  The Greek Square Cross on the upper left-side of the flag signifies the respect and the devotion that Greek people have for the Greek Orthodox Church and shows the important role of Christianity in the formation of the modern Hellenic Nation. During the years of Ottoman rule, the Greek Orthodox Church helped the enslaved Greeks to retain their cultural characteristics: the Greek language, the Byzantine religion and the Greek ethnic identity. Today, Christianity is still the dominant religion among Greeks. 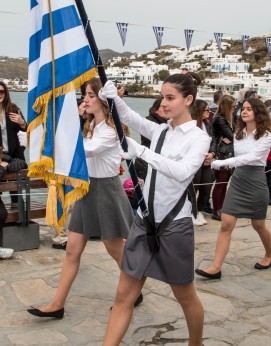 Following the parade, a wonderful dance display by the school children of Mykonos.  Photos by Leanne Vorrias. http://www.LeanneVorrias.com