Who started the Carnival? The Venetians? Brazilians?  Guess again.  Many attribute carnival origins to the ancient cult worship of the Greek god of wine celebration and ecstasy, Dionysus.  Ancient Greeks enjoyed processions, feasts and costumes honoring Dionysus and other gods and goddesses.

Followers would dress up as satyrs, some hid their faces behind masks and generally  acted wild, obscene and with ecstasy. The greek word ecstasy meaning “outside the body”. They celebrated the return of spring but also included rituals to the souls of the dead. These celebrations were not looked highly upon by the Orthodox Church.  The church managed to eventually subdue the pagan importance and substitute Christian practices.    The Orthodox also pay tribute to their dead with the Psychosavata or Soul Saturdays offering prayers and koliva (ritual food of boiled wheat) for the departed relatives and friends. 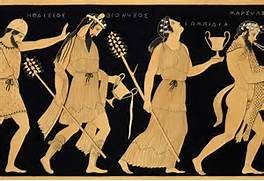 “Following the torches as they dipped and swayed in the darkness, they climbed mountain paths with head thrown back and eyes glazed, dancing to the beat of the drum which stirred their blood’ [or ‘staggered drunkenly with what was known as the Dionysos gait’]. ‘In this state of ekstasis or enthusiasmos, they abandoned themselves, dancing wildly and shouting ‘Euoi!’ [the god’s name] and at that moment of intense rapture became identified with the god himself. They became filled with his spirit and acquired divine powers” (Peter Hoyle, Delphi (London: 1967), p. 76.). 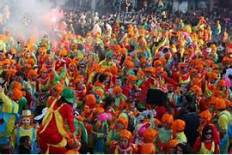 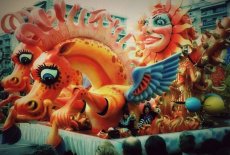 Modern Greece has been celebrating the ancient tradition of Carnival with increasing revelry each year.  The Greek Carnival dates are tied to the Greek Orthodox Easter. It takes place three weeks before Lent Monday.  It finishes 7 weeks before Easter.  This is why the dates are different from Mardi Gras.

The city of Patras ranks in the top three carnival celebrations in the world next to Rio and New Orleans.  Rethimno in Crete and Corfu Island are also known for fun carnival activities.

Forty days before Lent, Carnival begins on Sat. night as a religious ceremony with the opening of the Triodion in church. This is a book with three sacred odes.

Everyone who’s been to New Orleans knows about “Fat Tuesday”, but in Greece they enjoy “Burnt Thursday.”  It is celebrated eleven days before the beginning of Lent. The “Burnt” part refers to the grilling of meats, a big part of the celebration of this day. The weekend following “Burnt Thursday” will also have parties and other events; technically, that Sunday is the last allowable day for eating meat and is sometimes called “Meat-eating Sunday”. You will find it difficult to find a free table in good restaurants at this time.

Meat is not allowed this day. 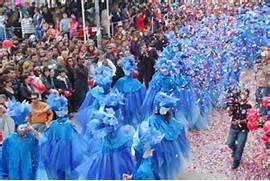 This is the largest carnival celebration with plenty of costumed parties and parades.

This is family-oriented and the last day of carnival. Many children fly kites on this day. All food eaten is “pure”, without blood shedding.  Cuttlefish, squid, fish roe and a flat bread called Lagana is often consumed.